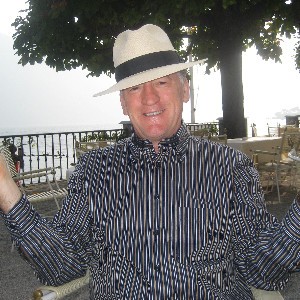 John Caldon was born in the village of Drighlington, Yorkshire in 1947. After studying classics at Cambridge, he emigrated to Australia in 1973 to specialise in tax accounting as a partner at Price Waterhouse. In 1984 he was recruited to the newly forming Macquarie Bank where he rose to become Joint Deputy Managing Director in 1996. From 1998 to 2015 John held significant roles as Chair of the NSW Rail Services, Australian Rail Track Corporation and the Australian Council for Infrastructure Development. In the last decade, he concentrated on television and media development in Australia and globally, via Flame Media which produced, acquired, and distributed programming both locally and internationally.

John was diagnosed with non-smokers non small cell lung cancer in April 2020. His disease was first detected as a mild persistent cough, which was then diagnosed as advanced Stage IV cancer only weeks later. John's excellent health throughout his life enabled him to fight this disease with vigour and determination, which was championed by the advocacy and care of his partner Lyndey Milan. During this fight John had his cancer analysed as part of the MoST (Molecular Screening and Therapeutics) program at the Garvan Institute and Kinghorn Cancer Centre. This clinical trial matched his cancer to a newly available drug that was able to temporarily stay the progress of the disease. Sadly John succumbed to complications from lung cancer in February 2021.

John loved life.  He loved excellent conversations and intellectual tussles, fine wine and good humour.  He loved the company of old friends as well as finding new friendships in which he could help others and explore new ideas. He was opinionated but highly compassionate, and generous to a fault.  His loss is a void that cannot be filled for partner Lyndey, son Pat and daughter Liz, and for his wide circle of friends.

We ask that when considering how you might express your affection for John and his family that a donation might be made in lieu of flowers.  John was immensely grateful for the work of the Garvan Institute in detecting the genetic mutation in his cancer. Therefore donations can be made to either support cancer research at the Garvan Institute, or to the Blair Milan Memorial Scholarship Fund which John co-founded with his partner Lyndey Milan, to support theatre/media students.

To Liz, Patrick and Lyndey, John was very proud of the ground breaking cancer research that Liz is spearheading. In loving memory of John and in warm condolence to you all.

Lizzie, John was a unique friend . We will always remember him.

My sincere condolences, your father was a special person and will be very much missed.

Dear Liz, Pat and Lyndey, So sorry to hear about your loss and Liz, so glad that work at the Garvan helped your dad. With deepest sympathy, Foong x

Your work is very important to my family Liz, thank you for your hard work, HelenX